For a dipole antenna centered on the origin and oriented along the z axis with length L, the far-field radiation pattern can be derived as follows:

The current on the antenna will be approximately sinusoidal, with zeros at the ends of the antenna, represented by

and the magnitude of R can be approximated as

Eliminate the absolute value by splitting into two integrals:

Flip limits on the first integral and combine

Now, integrate it, setting aside the constants and limits temporarily: 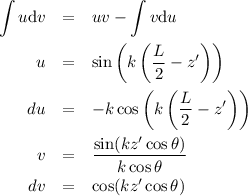 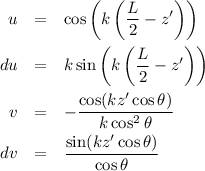 Time for some algebra:

and plug in the limits

and bring back the constants

en/electronics/antenna-theory/dipole-derivation.txt · Last modified: 2014/10/20 23:04 by alex
Except where otherwise noted, content on this wiki is licensed under the following license: CC Attribution-Share Alike 4.0 International